Christine's "life" began in the summer of 1957, when she was built on the assembly line of one of Chrysler's plants in Detroit, Michigan. She was built to order, on the specifications given by Roland D. LeBay when he walked into Norman Cobb Plymouth in Libertyville, Pennsylvania that same year. As cars begin their model year production the year before, Christine was built as a 1958 Plymouth Fury, painted Autumn Red and white on the outside and "red as a fire engine on the inside". When she arrived at the dealership in September 1957, Christine had 6 miles on her odometer, and the 'new car smell' of her interior was "just about the best smell in the world" as Roland D. LeBay would later recall. She was paid for in full the day LeBay picked her up, and remained with LeBay for the next twenty-one years. By that time, Christine was a decaying, barely-operable wreck, well past her prime. In the fall of 1978, Arnie Cunningham happened on the car and instantly fell in love. Arnie's best friend, Dennis Guilder, who notes several major problems with the car merely by sight, the worst being the large puddle under the transmission.

Noticing the "For Sale" sign on the sun-beaten car, Arnie ignored the stern advice from Dennis and decided to buy her for LeBay's specified price of $250. Unable to pay the full amount, he settles on a $25 deposit and agrees to return the next day with the balance. Christine was moved to the garage in the meantime, and the oil was changed (at minimal cost) by LeBay. Arnie briefly exploded into fury when he discovered the car missing from the front lawn, but LeBay calmly pointed out he had just moved her and invited him inside to sign the paperwork. While they were inside, Dennis went to the car, overcome by morbid curiosity, and got behind the wheel. Briefly, he saw the car, the lawn, and even the street outside just as it had been in Christine's glory days, when "gas was as cheap as tap water". Frightened by the unnatural event, Dennis instantly decides on his dislike for the car and gets out.

Over the next several months, Christine was restored by Arnie at Darnell's, a local do-it-yourself auto repair facility. The car is repaired haphazardly, and not all of the repairs seem to be done by Arnie, who becomes withdrawn, yet more confident and self-assured and whose appearance improves in tandem with Christine's. George LeBay relates to Dennis that Roland's young daughter choked to death on a hamburger in the back of the car, and then Roland's wife, traumatized by this death, apparently committed suicide in the car by carbon monoxide poisoning.

When Arnie is almost finished restoring Christine, a highly attractive student named Leigh Cabot transfers to his school. It is a surprise to everyone when she decides to go out with Arnie. While on a date with him, Leigh almost chokes to death on a hamburger. Leigh is certain that Christine was behind it, and when Arnie attempts to save her by hitting her on the back she notices that the dashboard lights on Christine seem to have turned into glaring green eyes. Leigh is saved from death by a hitchhiker, who pulls her from the car and administers the Heimlich Maneuver. Despite Arnie's protestations, Leigh continues to feel as though she is competing with Christine for Arnie's affection.

One by one, members of Buddy's gang are killed by a rebuilt Christine. Others who were hostile to Arnie or Christine also die. The police investigate the murders and become suspicious of Arnie. However,  the car apparently acts on its own when he's out of town. Although the police find paint chips at the crime scenes that match Christine's color, they find no damage, bloodstains, or other evidence on the car, since Christine supernaturally repairs herself after each attack.

Arnie's father is found dead in Christine, apparently from exhaust fumes. Arnie and his mother die in an auto accident: witnesses to the accident saw three people in the car before the crash, but only two bodies were found. In the meantime, Christine is destroyed by Dennis and Leigh in Darnell's using a huge, pink-colored septic tanker truck, and the remains were fed into the crusher in the back of the garage by two police officers, one receiving a bad cut that needed stitches, and saying "it bit him". Four years later, in Los Angeles, Sandy Galton (the last of Buddy Repperton's gang still alive) died a mysterious death when an unknown car, seen by no one but Sandy, crashed through the wall of the movie theater where he was working and killed him. Dennis, thinking of how Christine, her spirit so inspired by that of Roland LeBay and his "single-minded purpose" and "unending fury", never once stopped returning to take revenge on the ones who had crossed her, realizes that Christine may have rebuilt herself and begun working her way east, coming back to "finish the job". Dennis thinks of George LeBay, his sister, Leigh, and considers that Christine may well be saving him for last.

In the book, Christine is a 1958 four-door Red Plymouth Fury that a high school dork named Arnie Cunningham purchases to George LeBay for $250 in 1978. It is a fancy car, with white brimmed tires, double headlights, and white trimmed rims, but it is also wrecked, and is in need of serious repair.

Christine is destroyed by Buddy Repperton and his gang, who want revenge for Buddy being expelled because Arnie told a teacher that Buddy threatened him with a switchblade. After Christine's destruction, Arnie angrily blames Leigh for it, and fights verbally and even physically with his parents. Arnie frantically attempts to fix the car again,but the car rebuilds itself in front of him, in a manner similar to a striptease.

Christine goes after Repperton's gang, killing them all one by one, all the while playing ironic oldies music starting with Moochie Welch. Each time Christine commits a murder, she restores herself so there is no evidence of what she has done. At the end, Repperton himself is killed when Christine smashes through a gas station and blows it up killing Richie Trelawney by crushing him against Buddy's Camero and Don Vandenberg in the explosion that Christine starts. Then Christine chases Buddy while on fire and drives over him, leaving his flaming body in the middle of the country road. Christine pulls into Darnell's, and Darnell is suspicious. He grabs a double-barreled shotgun and goes inside Christine who crushes him with the seat.

Finally, Dennis decides to stop her and carves "Darnell's Tonight" into her hood and faces Christine and Arnie with a bulldozer. Arnie is killed with a shard of glass in the battle, but Christine is smashed and crushed into a cube and what remains of Christine is dropped into a junkyard. However, a piece of Christine's grill slowly starts to bend like a grin, indicating that Christine is still alive, prepared to rebuild herself and go after Dennis and Leigh.

Nobody knows exactly where Christine came from; in the movie, it is suggested that Christine was bad from the start, because she crushes a man's hand with her hood and kills another after he drops a cigar ash on her seat, all while she was being built. In the book, it is suggested that she may be possessed by the ghosts of Roland LeBay's family; his daughter choked in the backseat- later information reveals that LeBay deliberately left his daughter in the back seat of the car, speculated by Dennis to be him attempting to sacrifice his daughter to Christine-, and his wife committed suicide inside her front seat. Either one suggests that she could have been bad to the bone even before those, and that she killed LeBay's daughter, rather than LeBay's family possessing the car. In the book, it is heavily implied that LeBay himself has possessed the car, though this is rather unclear. It's also hinted that she absorbs the souls of her victims, such as LeBay's family or Repperton's gang.

What is known, however, is that she becomes extremely attached to her owners, and kills those who she sees as a threat to her relationship. She also makes her owners become obsessed with her, and kills anybody who may be hurting them. She also possesses the power of regeneration, allowing her to repair any damage sustained in her independent rampages. However, it is unclear if this ability was limited at first; Arnie did some repair work on Christine when he originally purchased her, but she was shown repairing some damage on her own, making it unclear if she genuinely needed Arnie to work on her at first or if she was merely trying to 'blend in'.

Christine is one of King's most popular creations, books, and movie adaptations. She is seen in the book, the movie, and even referenced and seen in a couple other books and movies. She has also left a lasting impact on popular culture. She makes a cameo appearance in Cat's Eye along with Cujo, the rabid St. Bernard. As he chases General, they're almost ran over by a 1958 Plymouth Fury that pulls up and manages to brake in time. Afterwards, the car drives away. It has a bumper sticker that reads: "Watch out. I am pure evil. I am Christine") While not openly mentioned,  Christine appears in The Stand: The Complete & Uncut Edition. While attempting to return to Boulder Tom and Stu come across a "very old Plymouth". Unlike most of the other cars the two men came across, this one had no driver behind the wheel.  The key fob bares the initials A.C., an obvious nod to Arnie Cunningham. She also appears unnamed on It, driven by a cadaverical Belch Huggins who helps Henry Bowers to reach the hotel where The Loser's Club's members are. 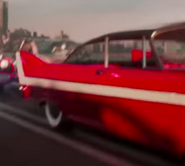 Retrieved from "https://stephenking.fandom.com/wiki/Christine_(car)?oldid=54515"
Community content is available under CC-BY-SA unless otherwise noted.