watch 01:47
Wiki Targeted (Entertainment)
Do you like this video?
Play Sound

Carrie is a 2013 American supernatural horror film. It is the third film adaption of Stephen King's 1974 novel of the same name, and a remake of Brian De Palma's 1976 film of the same name, this version is a more faithful adaptation of the novel. It stars Chloë Grace Moretz  as the title character, and Julianne Moore as her mother, Margaret White. The film was scheduled to be released on March 15, 2013, but was later moved to October 18, 2013. The film will be the first co-production between MGM and Screen Gems.

The plot follows the same structure as the originals: Carrie White (Chloë Grace Moretz), a misfit pupil gets beaten at home by her religious, deranged mother, Margaret (Julianne Moore) and constantly bullied at school by a group of popular girls called "The Ultras" led by the popular and spoiled, Chris Hargensen (Portia Doubleday). Carrie finally receives a moment of happiness, when one of her tormentors, Sue Snell (Gabriella Wilde) asks her handsome, jock boyfriend Tommy Ross (Ansel Elgort) to take her to the prom. But Carrie's night of shine and acceptance turns into a nightmare of destruction and chaos after one final, complete evil prank is pulled on her.

In the opening, Margaret was screaming very loudly in her bed, then gives birth to a baby girl, and about to kill her, but then she chooses to protect her instead.

Carrie White (Chloë Grace Moretz) is a girl in her last three months of her senior year in high school. All of her life Carrie has just wanted to live a normal life, but her overly-religious, deranged mother Margaret White (Julianne Moore) wants her to live a life free of sin. Margaret abuses Carrie, not only physically, but by locking Carrie in a closet to pray.

One day, after gym class in the school showers, Carrie has her very first menstrual period. Knowing nothing of periods, she thinks she's bleeding to death. The other girls laugh at Carrie and tease her by throwing tampons and feminine napkins at Carrie. One of the girls named Chris Hargensen (Portia Doubleday), records Carrie with a phone. Chris has always hated and bullied Carrie the most. Back at home, Margaret, believing Carrie's period to be a sin, forces Carrie into the closet and locks the door. As Carrie screams to be let out, she makes a crack on the door. Both Margaret and Carrie are surprised at this, and Carrie realizes she has incredibly strong and destructive telekinetic abilities.

The next day, the gym teacher Miss Desjardin (Judy Greer) informs the girls, who teased Carrie that they will have detention for the rest of the week with her. When Chris tells her she won't go, Ms. Desjardin informs her that anyone, who doesn't show up for detention, will have suspension and refusal of their prom tickets. Chris, feeling like she didn't do anything wrong, doesn't continue detention, goes away and plans to get revenge.

While Carrie looks up more information on her psionic abilities and practices them in secret, Sue Snell (Gabriella Wilde), one of the popular girls that took part in teasing Carrie in the shower room, felt bad about what she did and tries to make it up to Carrie. Sue asks her popular, handsome, jock boyfriend Tommy Ross (Ansel Elgort) to take Carrie to the prom and show her a good time. When Tommy asks Carrie, she is at first suspicious, but then accepts Tommy's invitation.

Carrie informs her mom that she's been invited to prom, but Margaret says no. Carrie begs and tries to make her see her reason, but when Margaret walks away, Carrie reveals her power to her mother. Margaret thinks Carrie's powers come from the Devil, but Carrie explains her advanced telekinesis and how she isn't the only one, and that she wants things to change, meaning no more abuse or closet time.  Margaret still believes Carrie has evil powers and that sin has found its way into her. Carrie on the other hand gets ready for prom by buying makeup, and sewing her own dress. While Chris and her boyfriend Billy Nolan's (Alex Russell) plan to humiliate Carrie at the prom begins by going to a farm to kill a pig and pour it's blood into a bucket.

On the night of the prom, Carrie is excited, yet nervous, while Margaret is saying and doing everything she can to try to stop Carrie from going. Before leaving, Carrie telekinetically pushes her mother into the prayer closet and locks the door. When she arrives at the prom, Carrie feels amazing, like her whole life has led to this moment. When it's time to announce the prom king and queen, everyone is surprised to find out that Carrie White and Tommy Ross won. This is all part of Chris and Billy's plan. Chris' best friend Tina Blake (Zoë Belkin) slipped fake ballots into the voting box, so the two would win.

Once on stage, Chris pulls the rope to a bucket of pig blood that stood above Carrie showering her with the blood. Humiliated she wants to get away from there, until the video that Chris taped of her in the locker room appears on the big screens above the stage. Most people laugh, while the rest don´t do anything. Soon afterwards the emptied bucket falls on Tommy's head, killing him instantly. Finally having enough and driven by the feeling of being in a room full of killers with evil purposes towards her, Carrie mercilessly unleashes her extremely powerful telekinesis on all of the prom-goers. The telekinetic shockwave knocks everyone down. Then she throws Heather Shyres across the room and into the doors, smashing her face. All the students, now terrified, begin to panic, and in blind hysteria, stampede for the exits. But before they can escape, Carrie locks all the doors so no one can escape, and telekinetically controls and moves multiple objects at once, killing people with them. She kills Jackie Talbot and Freddy Holt, crushes Jackie with bleachers and smashes Freddy with a table. Carrie spots the Thibodeau sisters, Nicki and Lizzy, trying to leave and knocks them down and holds them there, while the panicking prom goers trample over them, killing them. She then breaks all the electrical equipment which crashes into the floor, setting the curtain on fire. Carrie becomes enraged at the sight of Tina Blake attempting to leave with Mr. Ulmann and she throws a burning silver moon at her separating them both. She then begins zapping Tina with wires causing her to stumble backwards into a piece of burning debris, which sets her dress on fire.

Flailing her arms around, Tina screams as she burns to death. Desjardin and George watch in horror before she eventually falls to the floor, dead.

As Sue comes to see Carrie, she sees the terror that Carrie is causing. The fire from the curtain has consumed the gym and as burning objects fly across the room, Ms. Desjardin and a few students are able to escape. As the school burns to the ground, Carrie leaves and walks home covered in blood, while barefoot and leaving a trail of fire and mass destruction in the town. On the way home, Carrie sees Chris and Billy driving toward her in an attempt to run her over, but she uses her abilities to stop Billy's car in its tracks by telekinetically levitating it in the air.  Billy dies from too much blood loss after breaking his nose, and Chris tries to get out, but Carrie's telekinesis is strong enough to prevent her from doing so. She revs up the car, but Carrie stops her with her powers, causing her to drive to the gas station, causing her to have her face go through the windshield with shards of glass in her cheeks. She begs for help but Carrie refuses as she sets off a gas pump causing the car to explode and kill Chris with her corpse burning alongside Billy's.

When Carrie gets home, she runs to the closet where she locked up her mother, not knowing that while she was at the prom, Margaret broke out and grabbed a knife. After Carrie washes off the blood over her, Margaret then finds Carrie and tells her about how she and her father believed sexual intercourse was a sin, but Carrie's dad got drunk and raped Margaret, but she admitted that she "liked it," thus Carrie was born. Margaret attacks her with her knife but Carrie stops her mother's hand, and uses her powers to push her away. Carrie's mother attacks her, cutting her with the knife. Carrie launches her against the wall and "crucifies" her with household objects and sends other blades into her chest and stomach. Carrie releases her mom, cradles her, and watches her die. Carrie, after realizing what she has done, becomes hysterical and makes stones start to rain from the sky and into the house, until Sue shows up. A furious Carrie grabs Sue with her powers and asked her why everyone tricked her at the prom. Sue then shows Carrie her mind and proves to her that she had nothing to do with what happened at the prom. Carrie tells her that Sue's unborn child is a girl and throws Sue out of the house

before the stones crush the house and herself in the process, while Sue, horrified, touches her stomach to feel like she's pregnant, completely surprised at the revelation, that Carrie found out she was pregnant, something not even she suspected.

During a voice-over of Sue's testimony in court regarding the prom night massacre and devastation surrounding it, in which she places the blame of the disaster on everyone, including herself, she visits Carrie's grave, which has been vandalized. There, she places a single white rose by the headstone before leaving. The headstone then cracks prior to exploding as we hear Carrie's scream, leaving Carrie's ultimate fate ambiguous.

Kimberly Peirce, the director of Stop-Loss and Boys Don't Cry, is slated to direct the MGM/Screen Gems film with a script written by Roberto Aguirre-Sacasa of Glee, Big Love, and Spider-Man: Turn Off the Dark fame. 15 year old actress Chloë Grace Moretz, who has played the child assassin Hit Girl in Kick-Ass and the vampire Abby in Let Me In, has been cast as the title role, Carrie White [1]. Julianne Moore will play Carrie's fanatically religious mother Margaret White. Portia Doubleday (Youth In Revolt) has also been cast as the girl who started it all Chris Hargensen. Gabriella Wilde has also been chosen to play the role of Sue Snell.

About the new film, Chloë Grace Moretz says, "… We’re kind of going off the book. It’s darker and much more psychological. More ‘Black Swan.’ You’re really looking into her mind and it really looks into the relationship of Margaret and Carrie. It’s set in modern time, so it’s a lot different… It’s something that’s very different from me. It’s an out of body thing. I’m becoming a totally different person for it. I’m letting go of all of my self-esteem issues and just kind of going into it. You have to."

Sony Pictures held a "First Look" event at the New York Comic Con on October 13, 2012. It was followed by a panel session with several members of the cast and crew. The first teaser trailer for the film was released on October 15, 2012.

Sony held a "First Look" event at the New York Comic-Con on October 13, 2012. It was followed by a panel session with several members of the cast and crew.

Trailers for the film have included a phone number which when called results in playback of a recording simulating an encounter with characters from the film. An option is given for the caller to receive additional promotional phone calls and text messages. 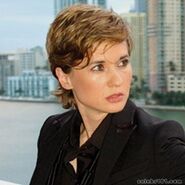 Moretz on set dressed as Carrie 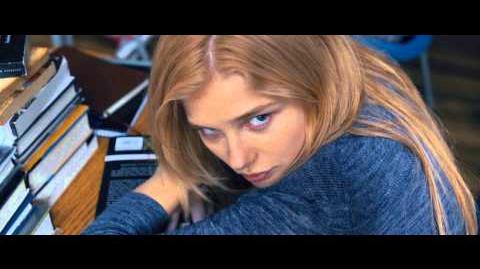 Retrieved from "https://stephenking.fandom.com/wiki/Carrie_(2013_film)?oldid=77327"
Community content is available under CC-BY-SA unless otherwise noted.