Stephen King Wiki
Register
Don't have an account?
Sign In
Advertisement
in: Diseases, The Dark Tower, Apocalyptic, The Stand 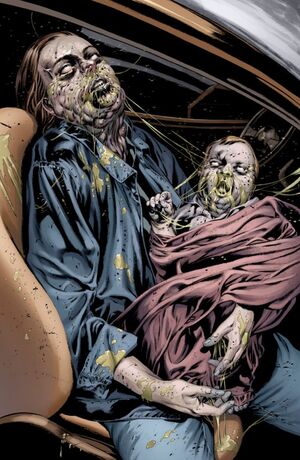 Captain Trips is a nickname for the constantly-shifting antigen virus that exterminates 99.4% of the human population in The Stand. The meaning of the nickname is never revealed.

Developed under the codename Project Blue by a biological weapon's laboratory located beneath California's Mojave Desert, it is also known as Blue virus (Blue Virus), 848-AB, A-prime, A6, the rales, superflu, choking sickness, and tube neck.

The virus is set loose on the population when Charlie Campion, who was working in the base that developed it, noticed that the virus had been released in the base and managed to escape with his wife and daughter, but not before being infected with it himself. He carried the virus all the way to Arnette, Texas, before dying, thus setting in motion the events of the novel.

Captain Trips is an extremely deadly virus, able to be transmitted as easily as the common flu it is based on, with far more lethal results. It has a communicability rate of 99.4%, meaning that all but a tiny few of humans can catch it. The virus starts out like a common cold, causing weariness, nasal congestion and sneezing, and most people who catch it think that a common cold is all they have.

The superflu virus is highly adaptable, shifting and changing constantly, making medicines useless against it. At best, medicine only briefly holds off the inevitable. No vaccine was ever developed for it, before or after its escape from the lab where it was created, as its constantly-changing nature made a vaccine impossible to create. The fact that it was designed as a biological weapon is another reason for the lack of a cure; it was supposed to be unstoppable, as anything less would have limited its ability to kill swiftly and efficiently.

As it progresses, Captain Trips causes increasingly-worse fever, headaches, crippling physical pain, swelling, and delirium. Victims slip in and out of consciousness, and begin thinking they are in other places, other times in their lives. Sometimes, when nearing death, victims will actually calm down and return to clear, level-headed thinking for a short time. In all cases, however, once someone has caught Captain Trips, the chances of death are 100% certain - it's just a question of how long it will take for the virus and it's complications to wear out their body's natural defenses.

It is unknown how a given human or animal can be immune to the superflu, but based on the United States Military's own knowledge of the virus (from data on it in the files of Project Blue), 0.6% of the human race was immune to it. Most likely, immunity is genetic, and would be that way for the animals capable of catching the virus as well.

Colonel Richard Deitz, operating in Atlanta, then in Vermont after the Plague Center in Atlanta was compromised, led the effort to find a cure for the virus. Due to the fact that "Captain Trips" shifts and changes at an extremely rapid pace, not one attempted vaccine worked. Men and women with a lifetime of experience in medicine were mystified at Stuart Redman's survival, especially after they injected him with the superflu under the guise of administering a sedative. Redman's immune system swiftly isolated and killed the virus, but with no visible sign of how.

Human civilization collapsed entirely within one month of the virus' outbreak, and no cure or means of giving others immunity to the superflu was ever developed.

The superflu was a biological weapon created by the American government, which got loose during a containment breach on June 13, 1990. Everyone died in the base, except for a security guard named Charlie Campion, who fled the base with his wife and child, unaware that he was infected himself.

Campion crashed his car in a gas station in Arnette, Texas on June 16, before succumbing to the virus. The virus spread to the residents of Arnette, and on June 18, started an explosive spread across America and then the world, like a chain letter from Hell. It had a 99.4% communicability rate and a 99% mortality rate. The US government forced news services to print and broadcast the official line, which was that there was nothing wrong going on, it was just the normal flu, and the situation was being under control.

Hospitals soon over filled to capacity and entire towns were quarantined as soldiers were deployed on the roads and highways, blocking off the entrances and exits. It wasn't long before evidence to the contrary began to spread. Photos, videos, and eyewitness accounts revealed to the world the truth. Soldiers dumping bodies into harbors from trucks and barge-trains full of plague victims that were towed out to the sea to be dumped.

Posters went up on college and university campuses throughout the country. Flyers that were variations on the theme of government complicity and cover-up with the superflu, which spread panic. Rebellious journalists, news staff, and talk radio broadcasters began to print and broadcast the truth, alerting the public to the lethal pandemic and the government coverup. To suppress the news, soldiers massacred protesting college students, executed news employees, and blew up the buildings of news broadcasters.

Full blown riots broke out in most parts of the country (and the world), as people took advantage of the situation to loot for supplies. Eventually, these looters and rioters caught the superflu, and either locked themselves in other peoples’ houses, or died trying to leave the city in clogged highways. Most of the population died either bedridden in their own homes, or stuck in traffic until they succumbed to the plague. The president, himself infected with the superflu, gave one last speech to a dying country, one last time denying that the virus was created by the government and its lethality.

Eventually, the superflu burned out, and by July 4th, 1990, 99.4% of the human population had died. Bodies laid either in their own homes, in their cars, or even on the streets.

Captain Trips, a man-made virus created by the United States Military on taxpayer dollars, killed all but a handful of the humans, dogs, guinea pigs, horses and monkeys on Earth by July 4 of 1980/1985/1990/1994/2020 (depending on the exact version or adaptation of the story). Riots, suicides, accidents, injuries (many of which were made fatal by a total absence of functioning hospitals and available living medical personnel), and murders cut down the number of survivors even further.

The animal species able to catch Captain Trips are implied to be doomed, left without a sustainable population, and humans have an uncertain future at best. While Frannie Goldsmith's baby, Peter, was able to fight off the superflu, another woman in Boulder had previously given birth to twins, and both of them had caught the superflu and died.

Millions of dead bodies were left in the wake of Captain Trips, most killed by the virus, others from different causes. In the few areas where survivors congregated, like Las Vegas, Nevada and Boulder, Colorado in the former United States, the decaying remains were collected and buried in mass graves. Everywhere else, the bodies were left in the hospitals, houses, cars, and on the streets where they had died. With the human population virtually wiped out, nearly all of the old world's settlements, vehicles, structures and buildings were abandoned, left to be reclaimed by the elements. 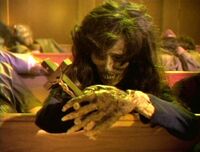 A dead woman in a Boulder, CO church. Churches, like hospitals, became places where plague victims went to die. 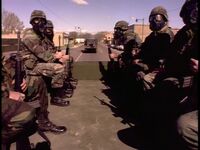 The Army moves into Arnette. 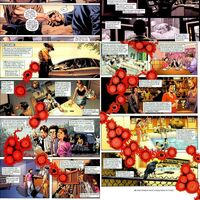 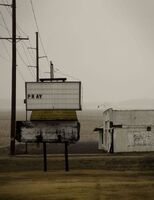