Billy deLois is a minor character in Carrie. He is a student at Ewen High School in Chamberlain, Maine.

In the novel, Billy is sent to Mr. Morton's office, along with Henry Trennant for cutting French I class and received 2 detention periods and a week's detention for it.

It is unknown if he attended the Prom.

Billy deLois is a minor character in the 2002 TV film of Carrie. He is portrayed by Cascy Beddow.

He is seen along with his friends at the library, bullying Carrie White. Until Tommy Ross throws a book at his face, causing his noise to bleed. His friends began to laugh at him while his nose continued to bleed.

He later died at the prom from being electrocuted along with everyone else there.

Billy deLois is renamed Greg deLois in the 2013 remake and he is portrayed by Evan Gilchrist.

He is first seen sitting next to his friend Harry Trenant and they both laughed and do dirty gestures at Carrie White. He then later appears at the Prom clapping and cheering for Tommy Ross and Carrie winning Prom King and Queen but as soon as the bucket of pig's blood gets dumped on Carrie he is then in complete shock but starts bursting into laughter when the locker room video begins to play on the projection screens. However, as soon as Tommy is fatally killed by the bucket and Carrie begins to cry over his dead body, he is then in confusion and in shock once more.

It is unknown if he survived the prom. 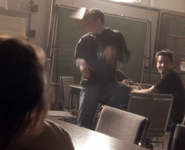 Billy getting hit by Tommy's book 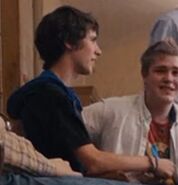