As a kid, Ben is described as having short brown hair that spikes when it's wet (like when building the Dam) and is obese for his age. Despite being considered unappealing when smiling at one point, Ben's face has the "ghost of the handsome man he would become".

As an adult (thanks to running the track team and eating right as a teen) Ben is tanned, lean and handsome.  Ben's hair is graying slightly but he still looks young.

Ben's role is very inconsistent between the book and the two live-action adaptations.

In the 1990 miniseries, as a kid, Ben (Brandon Crane) is more bulky than fat and has blonde hair instead of brown. As an adult (John Ritter), Ben's appearance is a further departure from the book: He has a beard and though he's supposed to be thinner than he was a kid, Ben is noticeably more stout as an adult especially compared to Bill or Eddie.

In the 2017 movie, Ben (Jeremy Ray Taylor) is much more accurate to the book, though Ben is still not nearly as large as he's described in the book. Ben is actually shorter than most of the boys (especially compared to Stan and Mike) and even Beverly though he is still taller than Eddie.

As a child, Ben was a sensitive, shy individual. He developed an intense crush on one of his classmates, Beverly Marsh. Being an overweight individual, Ben was often a frequent victim of Henry Bowers, who usually referred to him as "Fatboy" or "Fatfuck". His first encounter with It was in January of 1958 while crossing the canal on his way home from school. Pennywise appears down the canal and offers Ben a balloon, which floats--against the howling wind--in Ben's direction. Even at eleven, Ben has the mind of an engineer and is distracted wondering about the ability of the balloon to float against the wind. When he regains his senses, he finds that the clown has almost reached him, and has transformed into a mummy. The town whistle blows, distracting both parties, and Ben is able to break his paralysis and run home. In the mini-series, It appears to Ben not as Pennywise, but as Ben's father, who was killed in the Korean War. In the 2017 film adaptation, It takes the shape of the headless corpse of a boy killed in the Kitchener ironworks explosion.

While taking an exam on the last week of school, Henry attempted to persuade Ben into allowing him to copy his test paper. Ben refused. Henry eventually failed and was forced to take summer school. On the last day of school, Ben attempted to rush back home, only to be spotted and ambushed by Henry and his two buddies, Victor Criss and Belch Huggins. The three bullies eventually begin to taunt Ben, however, to Victor and Belch's shock, Henry pulls a knife out and begins carving his name into Ben's stomach. Before Henry can finish, Ben is able to kick Henry in the crotch. He then takes cover in the Barrens, hiding in one of the sewer pipes. While hiding there, Ben dreams about his close encounter with It earlier that year. After Henry, Victor, and Belch leave, he befriends two other boys, Bill Denbrough and Eddie Kaspbrak. He helps the two of them rebuild their Dam, which was destroyed by Henry and his buddies earlier.

The House On Neibolt Street (Novel only)

When Bill and Richie told the other Losers about the time when they went to the house on 29 Neibolt Street and they encountered It in the form of Pennywise and a werewolf, the losers head over to the house near the train yards. They head inside and are attacked by It in the form of the werewolf. It focuses on Bill and corners him on the wall. Just as It is about to kill Bill, Ben stands in front of Bill and attacks It. It savagely slashes Ben's abdomen, knocking him into the bathtub. Beverly uses the moment to shoot It with the silver slugs. It swears vengeance on the Losers before disappearing back into the sewers.

Under the City (I)

On May 29, 1985, Ben received a phone call from his old friend, Mike Hanlon (who was the only Loser to stay behind in Derry), telling him, that the killings are happening again and that It may have awoken from its slumber. Mike asks him to return to Derry, as he fears, that It may still well be alive. Ben reluctantly agrees to return to Derry and overcome his trauma and fears.

(Novel only:) Shortly after the phone call, Ben heads down to a local bar, where he drinks heavily to relieve some of his worries and fears. Before departing, he lends a couple of silver coins to the bartender (the same coins he used to fight It in 1958 at the House on Neibolt Street).

Near the end of the book, it's implied or outright stated that Ben and Beverly will leave/left Derry together.

After meeting with the rest of the Loser's Club, each person goes their separate way around town. Ben visits the Derry Public Library to get a library card, and is greeted from above by It, standing on the staircase near the second floor of the library in his regular form. Soon after, It transforms into Count Dracula with Gillete razor blades positioned at odd angles in its mouth tearing off pieces of flesh and dripping blood onto the library patrons below every time it speaks, taunting Ben about the deceased Stan Uris and what he saw before his death. As Ben glances back when leaving several moments later, the vampire has vanished, but he sees a balloon with text confirming that his childhood adult friend and librarian, Barbara Starrett, was murdered by It.

Under the City (II)

"Derry is not like any town I've been in before. People die or disappear six times the national average. And that's just grown ups. Kids are worse. Way, way worse."

―Ben to the Losers

"Derry started as a beaver trapping camp. 91 people signed that charter that made Derry. But later that winter, they all disappeared without a trace. There were a rumor of Indians... but no sign of an attack. Everyone just thought it was a plague or something but it's like... one day everyone just woke up and left. The only clue was a trail of bloody clothes leading to the Well House."

―Ben to the Losers' Club about Derry

"I actually think it will end now, for a little while at least."

―Ben to the Losers Club

"So I was going over all of my data research and I charted out all of the big events. The Ironworks explosion in 1908. The Bradley gang in '35 and The Black Spot in '62 and now kids being... I realized that this stuff seems to happen every 27 years." 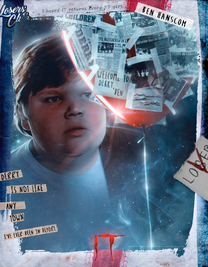 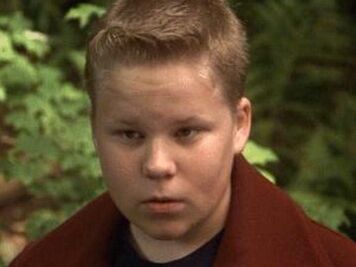 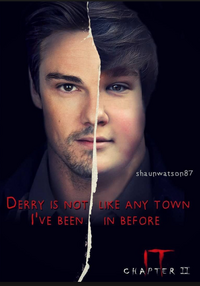 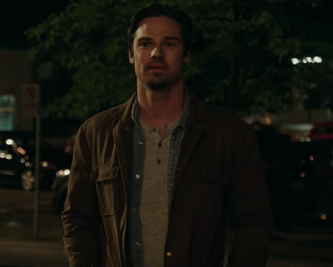 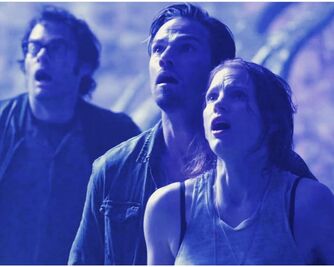 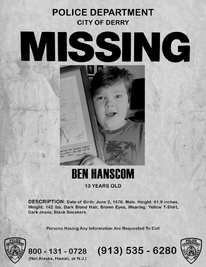 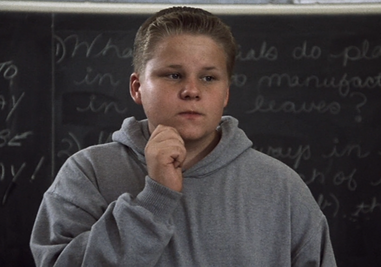 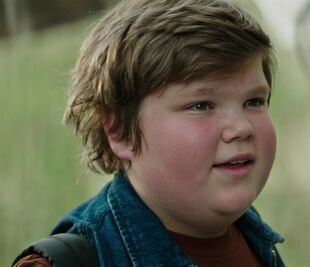 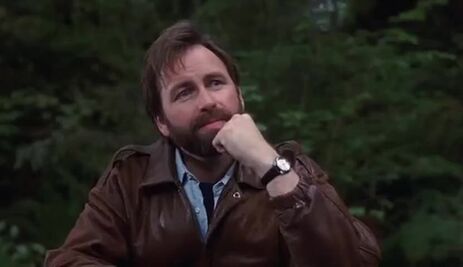 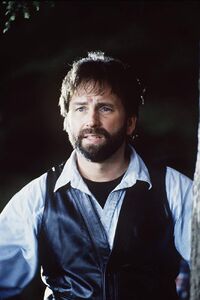 Cite error: <ref> tags exist, but no <references/> tag was found
Retrieved from "https://stephenking.fandom.com/wiki/Ben_Hanscom?oldid=75684"
Community content is available under CC-BY-SA unless otherwise noted.