Stephen King Wiki
Register
Don't have an account?
Sign In
Advertisement
in: Characters, Living Characters, The Rage: Carrie 2,
and 5 more

Barbara Lang was the mother of Rachel Lang in the movie The Rage: Carrie 2. She was portrayed by actress J. Smith-Cameron.

She was put into an institution, when Rachel was a little girl after an episode involving Barbara painting her house red in an attempt to "protect" Rachel from evil spirits. Her daughter visits her regularly.

Sue Snell visited Barbara years later to find out who Rachel's true father was. Reluctantly, Barbara revealed that the father was none other than Ralph White, the same man who fathered Carrie White. Barbara was hesitant to disclose this information because of the "local legends" surrounding Carrie and her explosive prom night finale 23 years earlier.

Rachel is mingling with Jesse's friends, when the football players reveal their sex game and claim that Rachel was added to Jesse's list. Mark plays a tape showing Jesse and Rachel having sex, making Rachel believe Jesse never cared for her. Rachel's ability is triggered and awakened; she closed and locked the exit doors of the house and kills most of the party members in cold blood. Sue has taken Rachel's mother from the hospital and gone to Mark's house. They both arrived too late. Sue reaches the door just as Rachel throws a fire poker at a boy's head, killing Sue on the other side as Barbara watched in horror at the death of the woman who tried to help her baby. She witnessed the carnage ensuing at the hands of her daughter as Barbara began kneeling down on her knees, holding her cross necklace and beating it to her while praying, repeating "It's my fault".

Rachel hears her mother calling for her; which causes her to be distracted, Mark shoots Rachel with the flare gun. Rachel falls into the pool, causing a sensor to extend the cover. Rachel pulls Mark into the pool, and when the pool cover was fully extended, she uses his spear gun to free herself while he drowns. Rachel's mother believes she is possessed by the devil and runs from the house, abandoning her child, who has no one else in her life. Rachel prays for help. 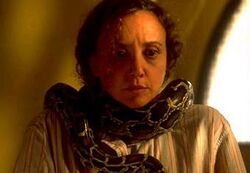 Barbara Lang with a snake around her neck.