Stephen King Wiki
Register
Don't have an account?
Sign In
Advertisement
in: Characters, Living Characters, IT,
and 6 more

Audra Phillips Denbrough is a minor character in the IT novel, the 1990 miniseries, and IT: Chapter Two. She is the wife of Bill Denbrough.

She was portrayed by Olivia Hussey in the miniseries and by Jess Weixler in IT: Chapter Two.

Audra's first appearance was in the novel IT, where she is Bill Denbrough's wife in 1985. Audra is a famous actress and model. She and Bill have an occasional working relationship and at the beginning of the novel she is set to star in an adaptation of a novel he wrote. When Bill leaves for Derry, he strongly urges Audra to remain in England, and, although she agrees, she leaves the next day to follow him. When she makes it to Derry, IT uses Tom Rogan to capture her and uses her as bait to lure Bill Denbrough. The Losers defeat IT once and for all, and rescue Audra from IT's lair.

She survives (she is the only person to survive the death defying limbo), but is left in a catatonic state. Bill helps Audra to come out of her catatonia by taking her on a bicycle ride on his re-found childhood bike Silver. He is impersonating the Lone Ranger, which is something he had done years earlier to help revive a young Richie, who was frozen with fear after meeting IT. Slowly she comes out of her catatonia and holds Bill, finally overcoming her fear. They kiss in the middle of a traffic stop in relief of her coming back to reality. Audra has a strong physical resemblance to the adult Beverly Marsh.

Audra appeared in the 1990 miniseries adaptation of IT, where she was portrayed by Olivia Hussey and as result has a European accent. She is captured not by Tom Rogan but by IT. After realizing that Audra is following Bill, IT decides to capture her and use her as bait to lure Bill into the deadlights in IT's spider form. IT takes the appearance of a gas station owner and fills her car up with gas. After that IT says the second catchphrase "don't ya want a balloon?" and transforms into Pennywise and activates the deadlights in IT's eyes, hypnotises her into, and drives off with her. IT also leaves her purse on the floor in the sewers to further bait Bill into IT's clutches.

Audra appeared in IT Chapter Two (2019), where she was portrayed by Jess Weixler. She is starring in a movie adaptation of one of Bill's novels, and before he leaves for Derry they have a fight about him having to rewrite the ending of the movie. She seems to side with the director and studio over Bill. She is not seen again for the rest of the film, unlike the novel and miniseries, where she follows Bill to Derry.

The reason her role was diminished in the film was like due to the actress Jess Weixler being pregnant at the time of filming and being unable to do certain things that Audra experienced in the novel.

Audra brainwashed by IT's deadlights. 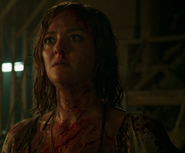