Stephen King Wiki
Register
Don't have an account?
Sign In
Advertisement
in: Characters, IT, Males,
and 6 more

Alvin "Al" Marsh is a supporting antagonist of the novel IT, the miniseries, and its 2017 film adaptation of the same name.

He was the spouse of the Elfrida Marsh and the insane, abusive father of Beverly Marsh in IT. Like Butch Bowers and Eddie Corcoran's stepfather, Richard Macklin, Al abuses his daughter. Unlike Butch and Richard, he tends to beat Beverly for odd reasons. While beating her, he constantly tends to say "Sometimes, I worry about you, Bevvie, sometimes I worry a lot."

He abuses Beverly and her mother and acts misogynistic. He hates it when she hangs around with boys. He is last mentioned during Beverly's childhood as trying to kill her out of anger to Its influence. He is also a form that It uses to frighten Beverly since she is afraid of him. In the novel and the miniseries, he dies of unknown causes, possibly he was eaten by It.

He died from unknown causes in 1980. He also appeared as one of It's manifestations, taunting Beverly into getting out of Derry.

Here Alvin is the widowed spouse of the late Elfrida Marsh. Here, he is physically and mentally abusive to Beverly, slapping her when she tries to explain the poem sent to her, and threatening to 'whip the skin off' her when she flees the home.

It Chapter One & Two

Here, his wife Elfrida has already been dead for an unknown amount of time. A flashback in IT: Chapter Two shows he celebrated her birthday by spraying her perfume over himself, Beverly, and Elfrida's clothing. He laments that Beverly looks like her, but that she is nothing like her mother. In IT Beverly manages to seriously injure him while he attempts to rape her. After he breaks into the bathroom where Beverly has locked herself in, she strikes him over the head with a cistern block, killing him. She is abducted by IT, and Alvin's body is left bleeding on the floor when Bill Denbrough comes to find Beverly.

It is suggested in IT: Chapter Two that Alvin survived, as when Beverly returns to Derry twenty seven years later, she visits her childhood home only to find out from Mrs. Kersh (a disguised IT) that Alvin had passed years prior. Beverly states that she had not spoken to her father in years.

Alvin isn't attracted by Bev, but he was obsessed with his daughter's virginity, thus having harassing and prevaricating attitudes typical of the American patriarchy of those years.

In the 2015 to 2016 scripts of the film, Al's character hits most of the beats of he does in his novel version. At least, he comes off that way. In his mind, anyone who lives under his roof is his property. And so, he treats Beverly with that mentality. This later leads to Alvin attempting to rape Bev, resulting in what would later be formed into the scene where Beverly hits over the head with a toilet tank lid, killing him instantly. 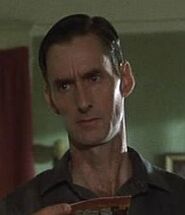